Today was a very big day, and to be honest I'm feeling a little wrung-out tonight. Because this was the first full day of the conference we got swag this morning, which had more than enough cool stuff in it to make me very happy.

The keynotes were great (yeah for awesome dancing robots on stage!), as was seeing the 2200+ people in the Grand Ballroom. 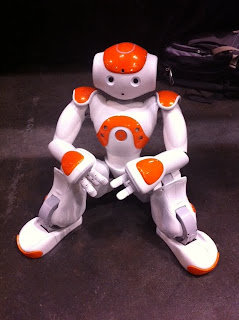 The first keynote speaker Stormy Peters' messages on community building, inclusiveness, and on building tools that enable end-users to make and control their data in the ways that they want and need to made lots of sense.

I've followed the second keynote speaker Paul Graham's work for a long time - he's a big part of the reason that I do things the way I do in python, and for my interest in Lisp and functional programming techniques. To hear him speak about Y-Combinator was an honour. The message that I took away from the keynote was that big things can grow out of small ideas, and that we, as developers, really already know what the important problems are.

During the talks I didn't follow a particular track, but rather tried to concentrate on maths and sciences talks that I knew relate strongly to the things that I work on, or could work on in the future (graph-processing, machine-learning, Py0MQ, Sage & Pandas), but I also went to Raymond Hettinger's talk on subclassing, and Dave Brondsema's talk on decorators and context managers.

I managed about five minutes in the exhibitors hall, and grabbed some great deals from the O'Reilley store at what ended up being about a third of the price of the same books off the shelf in Australia.

I also popped in on the end Testing In Python miniconf/open space session, which was an insane combination of informative, hilarious and a bit wrong (lab coats, beer and goat jokes). But the 100 people in the room were a testament to the dedication of the attendees on a Friday night at 9pm when there were at least two different parties running with free beer.

Matt Spitz's talk on practical machine learning had a number of good code samples, you can find his git repository on machine learning from baseball stats on github, and his slides at slideshare.

The talk on Sage including a link to an sagenb.com which hosts an online version of the Sage math notebook for experimentation and sharing with your peers.

Wes McKinney's slides on the VBench and the Panda's data manipulation and transformation library are available on slideshare, and his code is available from github
Posted by andrew at 03:36