I've arrived safely in Santa Clara, The city itself is amazing. From a nerdy perspective, it was awesome because it was almost like the internet coming alive. I saw buildings for Yahoo, Mcaffee, some big game development studios and more. It's very obviously a technology focused city. Even all the advertising is for software and software related services. 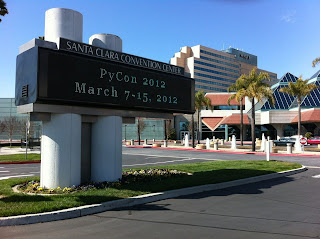 It's also very clean. It reminds me alot of Canberra (without the round-abouts). Very flat, with perfect footpaths and manicured grass edges.

I got back to the hotel and caught up with one of the other Australians I knew was coming, very nice to see a familiar face after a long day. I stopped and had a late lunch with him and another delegate. I don't think I'm spilling anything big, but the news is that the total numbers have crept over 2000 for the conference, with over 1900 registrations for delegates.

Wi-fi isn't working in my room at the moment, so I've had a quick nap, I'm posting this down in the lobby on the conference network, so I'm using that. In the time from late lunch to dinner time, the hotel lobby itself has gone from being filled with 'suits' to being filled with pythonistas.
Posted by andrew at 15:33